In a couple of earlier posts (intro here and follow-up here), I introduced and discussed a version of a TFT course I’m developing keyed to introducing students to writing in their target disciplines.

This post comes as an update, detailing the relationship between an assignment I inherited and the TFT curriculum. Since “Interdisciplinary Composition” was developed, it included an interview assignment wherein students were to interview a faculty member in their target discipline about their writing. Because the content of the TFT approach are genre and the rhetorical situation, the focusing question of the assignment was clarified: “What genres are frequently used in my discipline? And to what rhetorical situations do they respond?” After students completed the project, I grouped students together to distill their findings in a handout, resulting in handouts that distilled writing across broad disciplinary categories: the sciences, exercise science, business, education, and the humanities. Students were then asked to review a handout produced by students in a similar category and discuss the similarities/differences.

What was somewhat surprising was their reaction to their findings. Across the board students could see genre and rhetorical situation in their interviewees’ responses although without explicit use of those terms. Despite asking their interviewees about those issues, they were surprised nevertheless.

Thus, an unintended effect of these interviews was that students’ received verification that the theories we had been studying and applying for 12 weeks were a working part of experienced writers’ processes and not just a set of concepts learned in their writing class. 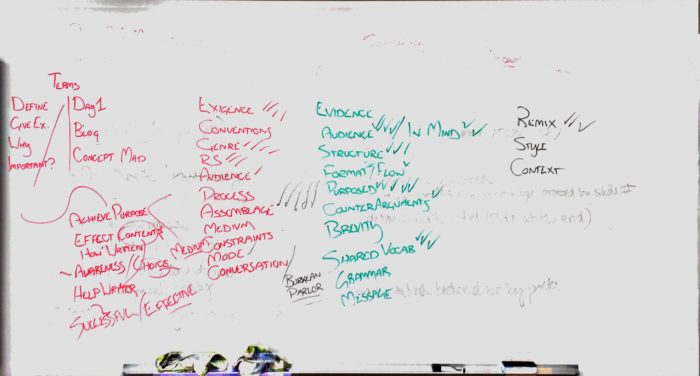 As was the case with the critical incident I discussed in an earlier post, there seems to be an affective component here. My hunch is that they are used to learning concepts that do not predict phenomena ‘in the wild.’ So by seeing concepts of genre and rhetorical situation in the wild, the concepts became imbued with more value: from ideas that explain facets of writing that can be applied to complete projects for school to ideas that others writers across the College use albeit with a different vocabulary.