The past ten years have been about discovering new ways to create, invent, and work together on the Web. The next ten years will be about applying those lessons to the real world.

3D printers, a piece of hardware used primarily to create prototypes of objects, have been the focus of some attention in Writing Studies. Ridolfo, Sheridan, and Michel frame a central question of their book — How do those in Rhetoric and Composition decide what new technologies to include in the field’s work? — in terms of the 3D printer. And to envision how writing classrooms might include the composition of objects, Nathaniel Rivers and James J. Brown Jr. turn to 3D printers as technologies that might facilitate that work (“Composing the Carpenter’s Workshop“). Such discussions interest me not primarily because of the *cool factor* of 3D printers — and they are pretty cool. Because I frequently take a historical view of writing technologies, I know that when writing technologies become small enough, affordable enough, and usable enough to move into the home for amateur use, a markedly different era of textual production emerges. This was the case for the typewriter, the desktop computer, the desktop publisher/word processor, the 2D printer, and of course web design platforms. As Chris Anderson has suggested, 3D printers are taking a similar trajectory. Through 3D printers, amateur-ish entrepreneurs are able to design and prototype their ideas for a fraction of the cost of traditional industrial production.

This most recent Computers and Writing was hosted at a polytechnic university in Wisconsin: Wisconsin-Stout. And because their campus includes a fablab which includes (among many machines) a 3D printer, there was a workshop on 3D imaging and 3D printing.

We began the workshop by photographing an object, in this case a die cast pencil sharpener shaped like a printing press. I picked up the pencil sharpener in Tallahassee for $2 a couple of years ago. Then, using an SLR camera, we took about a hundred pictures of the object at a variety of angles. Then, we processed those photos into a 3D model (pictured below). Using the model, the staff in the fablab flexed some of their manufacturing muscle to get the model ready for printing in a Makerbot which resulted in a near-identical plastic copy of the pencil sharpener (pictured above).

We also used a cutting machine to create objects with cardboard. This entailed working in a program, setting dimensions, axes, angles, etc., rendering the object into flattened cardboard slices, letting the cutter do its thing, and assembling the resulting interlocking cardboard pieces into a shape: in my case, a 3D cardboard skull. 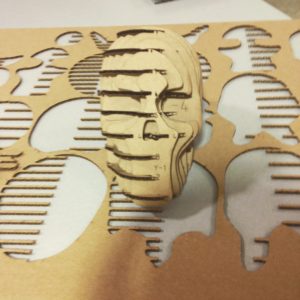 I’m left wondering what to make of this experience. On one hand, it was fun, but I’m not confident that I can recreate the process without a good deal of guidance. On the other hand, I’m still at a loss about if and how this fits into the field’s work. I think objects can be powerful resources for composing. Sirc’s “Box Logic,” Shipka’s work, and Delagrange’s work are enough evidence of that. But this composing experience felt markedly different than those assemblage-focused kinds of composing. Perhaps I feel this way because the process felt very clean, very industrial, and very much rooted in industrial design rather than communication. However, at the same time, there were technological issues/glitches that invited some reflection about how messy and unpredictable technology can actually be. For example, while rendering the same set of ~100 photos on 8 different desktops, each participants’ machine came up with a slightly different (and sometimes deeply flawed) 3D visualization.

So, to address the question Ridolfo, Sheridan, and Michel raise: Should Rhetoric and Composition be concerned with 3D printing?

I think so. In classrooms, 3D printing processes are interesting analogous examples to writing processes and especially those processes that deal with higher-end production software. So there may be something to learn about writing and composing by considering what different kinds of processes are involved when software is the primary means of composing. In terms of scholarship, I do think that objects can make arguments, but like any argument, form and content should come to coherence. Right now, I’m limited in imagination of what kinds of arguments are best made/enacted through 3D objects. Perhaps when we answer that question, 3D printers will have a less marginal place in the field.